The title "I Vanunu" is in reference to Mordechai Vanunu, the world's first nuclear hostage, who did 18 years of jail for having revealed to the London Times, in 1986, that Israel was making nuclear weapons. More infos on him here.

The album was recorded in one shot and mixed just afterwards. It wasn't planned, and wouldn't have been done without Ram Orion, who proposed Chicky and Chenard to use his recording skills - and his studio - as they were at a terrasse driking black coffees in Tel Aviv. Back to France, Chenard overdubbed some soli and did artwork after Chicky's suggestions. "I Vanunu" was also released as plastic by Israeli label Pit/Kit on the 1st of august, just three months after it was recorded. Check out the translation of Chicky's poems.

Chenard Walcker is a French samplecore artist layering large slabs of pop music, obscure funk, soundtracks, etc. The site offers many albums worth of material as free downloads, as an anti-copyright stance. He also publishes the Free Sample Zone, which is all his material under several monikers, and mostly overlaps the releases under the first link.

Reviewer: organic2000 - favoritefavoritefavoritefavoritefavorite - July 20, 2005
Subject: Great Album!
This is definitively the best album from chenard walcker with roy chiky arad! best produced, best atmosphere and i think most political uncorrect, even if most of the listeners dont understand the hebrew language (like me).

but i say: thank you mr. walcker and mr. arad (and everybody who was involved) for this album! - strictly download! 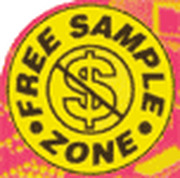